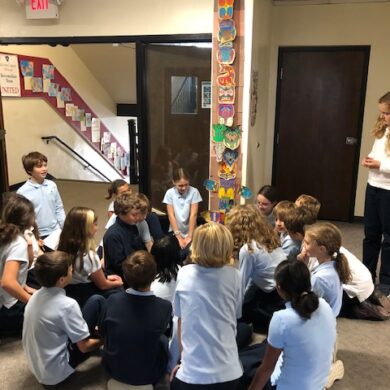 As part of a unit on the native people of North America, fifth graders learned about the role of totem poles in the history and culture of the tribes of the Northwest Coast of the U.S. and Canada. Students studied the many uses of these poles, which since the late eighteenth century, have been used for storytelling, tombstones, and family (clan) histories.
The project was also an opportunity to discuss the part oral storytelling played in the history of many native groups.  These tales were often origin stories or explanations of how animals or objects in nature came to be. Two fifth graders, Wesley Price and Larkin Smith, were selected by their peers to tell the stories developed in the oral tradition by their groups. A recording of each story was available by pushing a button by the poles. Students gathered to hear the final stories earlier this week.
Glenda Bedard
Grade 4 & 5 Social Studies and Language Arts Teacher
Previous Post | Next Post